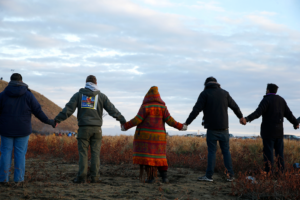 Washington, D.C. — In its push to protect 30 percent of U.S. lands and ocean by 2030—known as the 30×30 plan—the Biden administration should respect tribal sovereignty and support conservation efforts led by Indigenous communities, according to a new issue brief from the Center for American Progress.

By pledging to provide Native American tribes with a greater role in the care and management of public lands, President Joe Biden has shown a willingness to confront the injustices that affect nearly all aspects of U.S. natural resource policy, the brief says. These include not only the history of land theft, erasure and genocide, but also the government’s continued failure to meet its trust and treaty obligations to tribal nations and failure to recognize the integral contributions that Indigenous peoples have made to biodiversity and the climate.

“Recognizing, supporting and funding Indigenous-led conservation is not just a legal and moral imperative, but also a way to build the most effective conservation policies,” said Sahir Doshi, author of the issue brief and a research assistant at CAP. “It’s time to restore decision-making power to those who have the right and record to wield it best.”

The new administration has an opportunity to show that it will keep a respect for tribal sovereignty at the center of the broader 30×30 plan. It should ensure that tribes are included early in the process at the highest level of decision-making. New conservation opportunities should also be made available to tribes with funding and flexibility. By meaningfully prioritizing tribal sovereignty, the administration can strive to meet its trust and treaty obligations, rather than once again offering lofty language without the backing of institutional muscle.

CAP’s recommends that the Biden administration establish a tribal-led task force to advise the interior secretary on tribal priorities for natural resource management and the pursuit of 30×30. The task force should make recommendations that would: